Why You Should Grow Strawberries in Pots

Posted by Kathryn Kure on October 05, 2014
Of course we all want our strawberries to look like this, don't we?

But the problem is, there are a few things you need to bear in mind when growing strawberries organically in South Africa.

First of all, let me introduce you to our strawberry thief of note:


The Shongololo, or giant black millipede, Archispirostreptus gigas eats decaying plant matter and also non-dead plant matter such as tomatoes, lettuces and even root crops such as potatoes, carrots and beetroot.

But I'm afraid to report they are particularly partial to strawberries, as are many other little scurrying creatures which eat plant matter. Shongololos are needed from a soil perspective, in that they are death on undecayed matter, which leads to rich and and fertile soils. Our organic options are many, but limited. While our Yorkshire terrier does chew them up, but not swallow, she's not allowed in the vegetable garden. However, what we do already have in the garden is an increasing colony of toads, plus of course our much-maligned mole-rat, both of which, it turns out, also eats shongololos - who'd have thought? Despite this, however, they have wrought havoc on our strawberries in beds.

Then there is the fact that strawberries do this:


Strawberries reproduce either through the fruit or their runners and, given half a chance, prefer the latter since from a reproductive strategy point of view, it's a lot more efficient. How efficient? We have an estimated 1500 strawberry plants all from a mere five we bought five years ago. During these five years, however, we have not had a harvest, of any kind or description, for a variety of reasons, but including the fact that they were so madly reproducing, they often didn't flower in the first place.

So your original, non-genetically modified strawberries love to reproduce through runners. If they are happy, you will find a glorious abandonment of runners decoratively sprouting every which way, They even put multiple growth points onto a single runner. But that means all their energy goes into making new plants and not new flowers and berries.

They absolutely need loads of compost to thrive. If denied it, they will be fat and green and appear to be flourishing - but they won't send out runners or produce flowers and fruit. Nothing. They need to be pumped full of nutrients to thrive. The best evidence that a plant is happy is if it begins reproducing, either through runners and/or flowers.

As an illustration, compare the plants on the left and the right. The left were planted weeks previously, in commercial potting soil, and those on the right in home-made compost. The left have not borne any fruit and the ones on the right copious amounts. Everything else is exactly the same.


Issue 4: They are Shallow-Rooted

Strawberries are remarkably shallow-rooted, which means they dry out quick, quick. If you ever transplant a strawberry and its roots are even a tiny bit over-exposed for as little as an hour or two, death results. Hence, they really need to be watered daily in summer particularly.

The Usual Solution: Not Advocated

Now the usual solution is this one, where you plant them in rows in a bed, with a depression between the rows which you fill with straw. The straw serves a few functions, it helps you see the strawberries against it, but, most importantly, it helps you see the runners, which you can then snip off. Since, only if it is thrwarted from reproducing from running will it decide to reproduce by the less-efficient seeds and start to flower.

The problems with this solution are:

Our Solution: Strawberries in Hanging Pots: 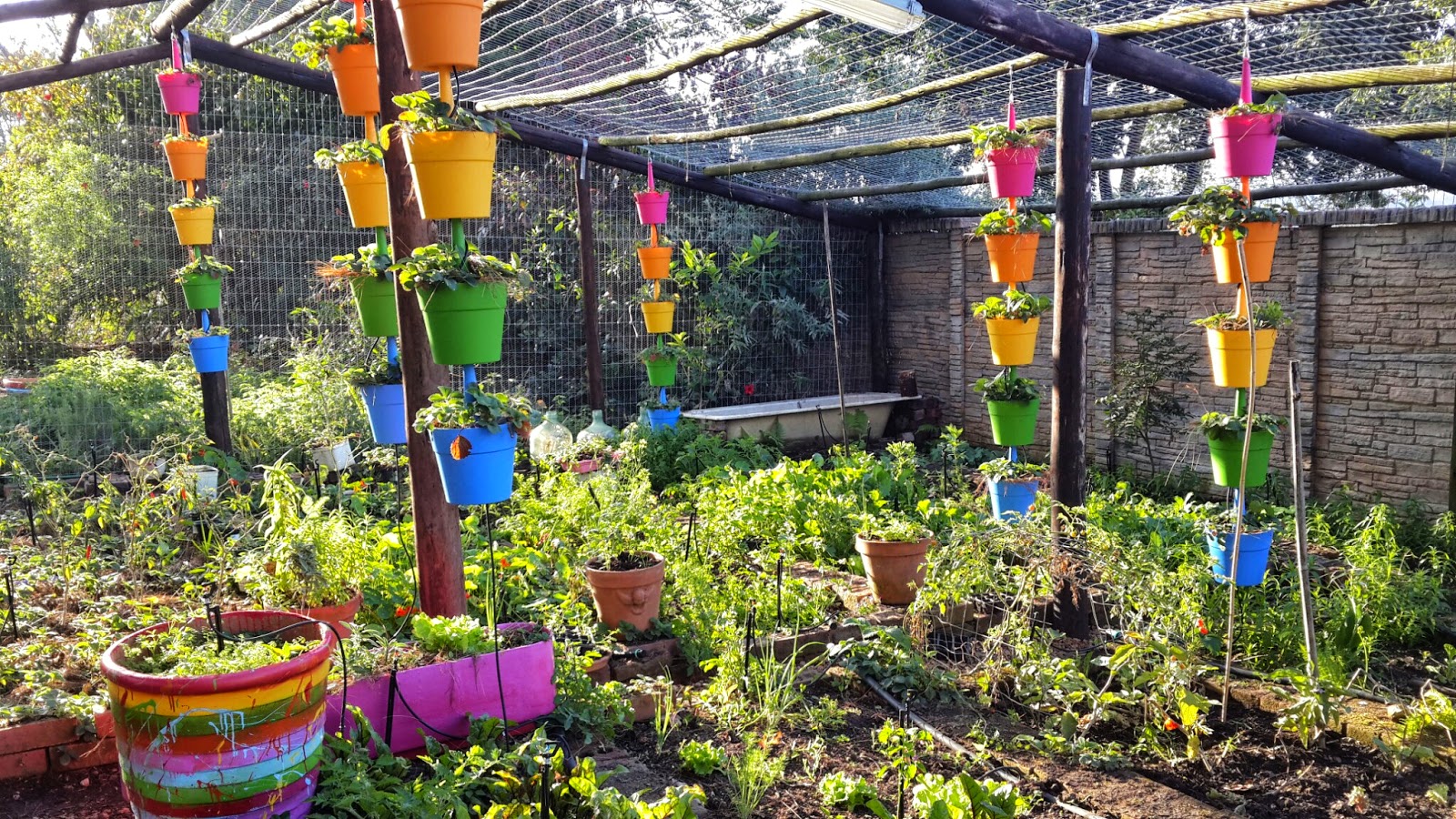 First, strawberries in pots are much easy to check and harvest than in beds, in that you can see their runners easily, and cut them off. Also, the fruit tends to hide under leaves, so they are easy to see at eye-level, but you miss a few when they are at ground level.

Secondly, they don't actually need a huge amount of compost, so filling an entire bed full of compost is somewhat extravagant and wasteful. When you have to husband your resources, it's far more efficient to use less - such as in a pot, which is easy to top up too and that way you can ensure your entire pot is full of divine, nutrient-rich compost.

Thirdly, they need both copious amounts of water, and also superb drainage, so popping them into pots that are irrigated means you can keep them perfectly watered, at least daily and be certain the irrigation works too. It's also easy to feed them liquid chicken manure. Yes, it's smelly, but - it works.

Fourthly, it's a hell of a lot easier to pot a few strawberry into a pot than create these beds with the depressions in-between them. Trust me on this one. If you don't believe me, just speak to my physiotherapist.

The hill and depression beds with the strawberries in the hills and the straw in the depressions work extremely well in places with hot, dry summers in that it is a mulch which prevents the shallow-rooted strawberries from drying out. But where we live in KwaZulu-Natal, and also Johannesburg (in fact, anywhere in the summer rainfall areas of South Africa), all this does is start to break down rapidly, thereby creating a perfect condition for mildew and attract noo-noos like shongololos to come feast on the now rotting straw or grass and, while they are there, partake of a postprandial snack of - your strawberries.

Fifthly, it makes use of your verticals. When you are limited to an area, such as this, by virtue of the fact that, though large, it is limited by the need to be monkey-proof, you do want to maximise your growing area and going vertical is one way to accomplish this.

Sixthly, and possibly most importantly for an organic gardener, it thwarts the shongololos. They can't clamber up the thin tubing that is the irrigation to the pot and so on. Well, if they can, I haven't seen a shred of evidence for it.

Finally, I love the pots for aesthetic reasons, they are just too pretty.

Postscript: The other place where I am also planting strawberries, however, is in bricks. I started popping them into the holes in the bricks used to line the beds, and they are doing amazingly well, even blooming and fruiting, as you can see below. I'm not sure if it is because they are slightly raised and warmer, by default of being surrounded by the insulating brick which would retain heat, or if it is because the other noo-noos that eat strawberries are less likely to make it up there, or if it is just easier for us to spy a strawberry harvest thus placed, but we are actually getting a better harvest out of these than in the beds (but a lesser harvest from the pots).